Celebrate 40 years of the phenomenally successful Rocky saga as well as the recent Creed movie with NECA! We’re relaunching our Rocky action figure line, with a mix of all-new figures and sold-out favorites for those who might have missed out.*

Series 2 focuses on Rocky IV, in which Rocky must avenge the death of his friend at the hands of Ivan Drago, the Russian gold medalist. It debuts a brand-new Apollo Creed figure in full stars-and-stripes boxing regalia, complete with alternate head sculpt, removable coat and top hat. The assortment also includes two versions of Ivan Drago in both yellow and red trunks with unique head sculpts, and an American Flag trunks version of Rocky with 2 head sculpts and an American flag that can be draped over his shoulders. Realistic sculpts feature the likenesses of actors Sylvester Stallone, Carl Weathers and Dolph Lundgren. These 7″ scale figures are fully articulated and ready to take their one-in-a-million shot at the dream.

*Special window box packaging both celebrates the 40th Anniversary and preserves the value of the original releases for collectors. 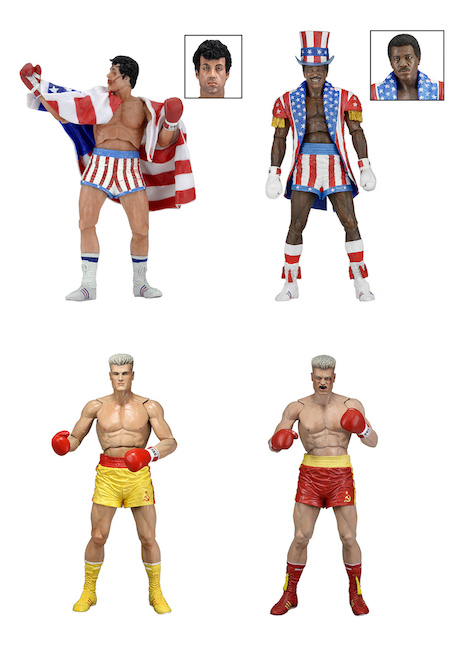