From the critically acclaimed movie Blade Runner 2049, the sequel to the legendary sci-fi film!
Bring home the action with these highly articulated action figures depicting the characters as they appear on screen. Series 2 includes Luv (featuring the likeness of Sylvia Hoeks) and Wallace (featuring the likeness of Jared Leto). Each action figure stands approximately 7” tall and has over 25 points of articulation.
Luv includes two knives and pistol accessories.
Window box packaging.

This first appearance of The Hitchhiker from Texas Chainsaw Massacre in our clothed action figure line celebrates the character’s circle of “life”! The Hitchhiker (aka Leatherface’s brother Nubbins) first appears in the 1974 film, where he meets a gory end. However, his mortal remains return in the second movie as a puppet-like pal carried around by Leatherface’s other brother, Chop Top.
This collector’s set includes both versions of the character and plenty of accessories. The Hitchhiker is fully articulated and comes with pelt, knife, razor and camera accessories. Dead Nubbins has synthetic hair, a bendable wire armature for posing and loops that allow your other TCM figures to be his “puppeteer.” Figures are approximately 8” tall and come in window box packaging. 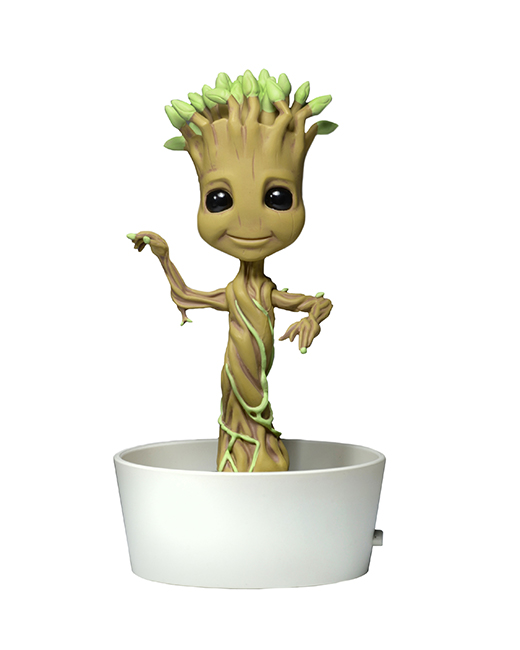 Solar-powered Body Knockers let you enjoy hours of fun with your favorite characters – no batteries needed!
From Marvel’s classic Guardians of the Galaxy comic books, Groot stands approximately 6” tall and dances from side to side when exposed to light. Collect all your favorites and watch them rock the day away!