It’s not every documentary that gets its own action figures, but then, not every documentary is Comic-Con Episode IV: A Fan’s Hope. Director Morgan Spurlock’s in-depth look at the lives of attendees at the 2010 San Diego Comic-Con captures a big part of what it is to be a fan, a geek, or someone whose life is otherwise intertwined with this massive enterprise.

Our exclusive, limited edition DVD of Comic-Con Episode IV: A Fan’s Hope includes two also-way-limited mini-figures. Each copy comes with the regular DVD (also available separately), as well as two of its Executive Producers: the Godfather of comic book culture, Marvel’s own Stan Lee, and Ain’t It Cool News founder Harry Knowles. These paragons of pop virtue have well earned the kind of immortality that only being made into figures can bring — and if you’re one of the lucky 20,000 to pick up the limited DVD, you can finally find out who wins in a fight. 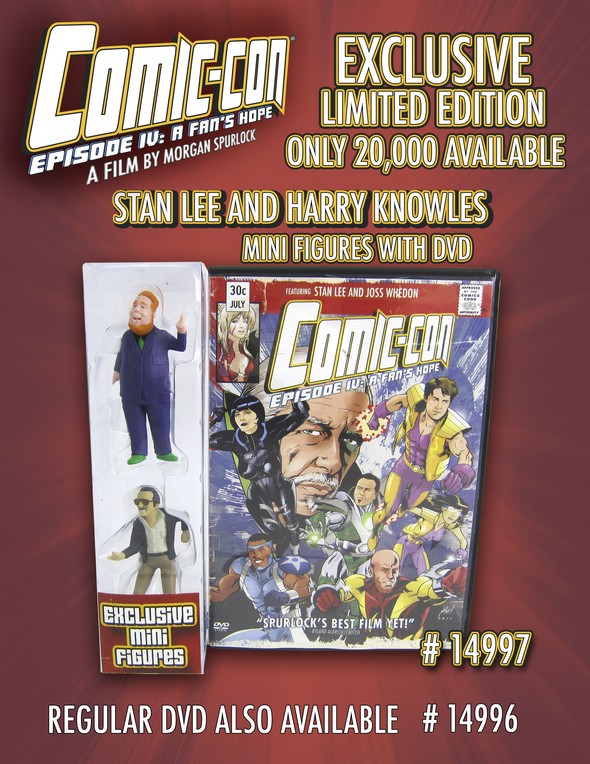 You can see the full film synopsis on the product pages or at the official Comic-Con Episode IV: A Fan’s Hope website, but basically, aside from giving the background on Comic-Con and how it came to take over the world, the movie tells the story of five attendees with different and very real lives. Check it out:

By capturing these very human stories, Spurlock & Co. remind us just how ingrained into the popular framework Comic-Con has become, and that geeks are people too. Just because you might wear an Iron Man costume to a convention doesn’t mean you also didn’t take a day off work to go.

If you didn’t see their announcement, our good friends over at WizKids have their own special edition Comic-Con Episode IV: A Fan’s Hope DVD that comes with 4 unique HeroClix of Knowles, Lee, Spurlock and producer Joss Whedon. We hope you’ll pay them a visit and tell them they’re awesome, or at least that we said hi.

There are 20,000 of NECA’s Comic-Con Episode IV: A Fan’s Hope Limited Edition DVDs available with Stan Lee and Harry Knowles mini-figures. All DVDs are Region 1 for U.S., Canada, Bermuda and American territories, and are available early July. Stay tuned for news and updates on Comic-Con and all your favorite games, movies, comics, and much more.