Our first-ever Dutch Schaefer action figure is packed up and ready to go!

If you’re not following NECA on Twitter, now’s the time to start keeping up. Our own Randy Falk, Director of Product Development and all-around nice guy, is constantly giving up-to-the-minute info on all our latest doings, whether it’s new licenses, the latest figures and other items, or even special behind-the-scenes looks at how it all comes together!

The latest? Well, the proof is in the pictures. Check out this exclusive packaging preview of Predators Series 8’s debut of Arnold Schwarzenegger as Dutch Schaefer:

This is getting better by the minute. — Dutch

It is indeed… because Predators Series 8 features not one but two versions of Dutch in 7″ scale!

Jungle Extraction Dutch, which Randy premiered in packaging above, is faithful to his appearance as they first enter the jungle, complete with military shirt and vest. He features over 20 points of articulation, and comes with M-16, pistol, machete, and knife accessories. And there’s also… 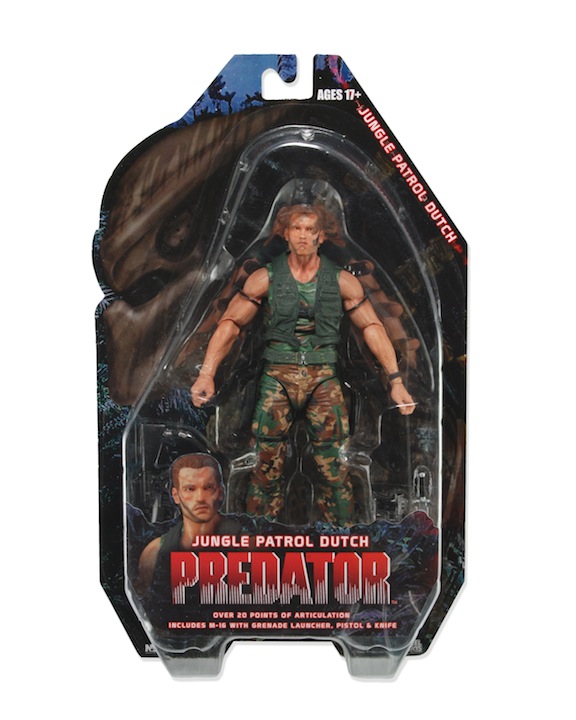 Jungle Patrol Dutch is immortalized in his camo muscle shirt and vest and features over 20 points of articulation, plus comes with M-16, pistol, and knife accessories.

You say you want even more on Predators Series 8? We’ve got you covered:

We Ain’t Done Yet!

If you know anything about NECA, you know we ain’t got time to bleed! Stay tuned for more on Predators Series 8 and beyond!

And don’t forget to show off your Predators collection to us on Facebook, Twitter or Google Plus!