In Pacific Rim, the categories and classes of Kaiju become bigger and badder as the action progresses, and in turn, so have our figure assortments! Too massive to be part of the standard assortment, these new Kaiju tower over your other figures and are in accurate scale to the Jaegers (sold separately). 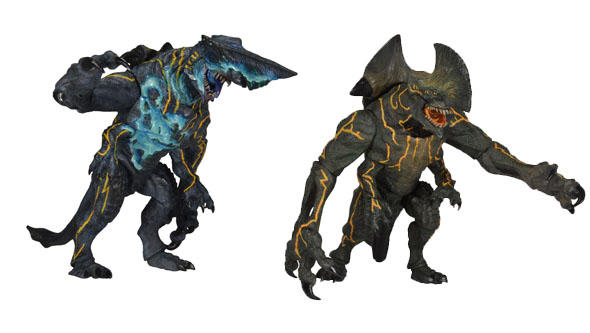 This series includes Trespasser and an all-new, battle-damaged Knifehead. Trespasser is the first Kaiju to emerge from the breach. It is huge in every way and features incredible detail, an enormous back fin, and over 20 points of articulation, including a hinged jaw and bendable tail.

Battle-damaged Knifehead, the largest Category III Kaiju, features an entirely new body sculpt that is 50% larger than the previous version, with improved detail and articulation. This version of Knifehead also sports over 20 points of articulation and battle-damaged deco reflecting the injuries it sustained in its fight with Gipsy Danger.