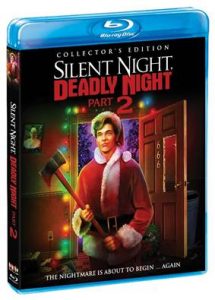 Los Angeles, CA – The nightmare is about to begin…again. “Santa” is back in the sequel to the infamous 1984 cult classic and horror holiday favorite. Silent Night, Deadly Night Part 2 comes to Blu-ray for the first time, lavishly presented in a Collector’s Edition set, on December 11, 2018 from Scream Factory. This release features a new 2K scan of an archival theatrical print, and is packed with bonus features, including new featurettes, interviews and commentaries with cast and crew.

Scream Factory will also offer a limited edition set that includes a poster, slipcover and the exclusive Ricky/Killer Santa action figure from NECA, available for pre-order on shoutfactory.com. This 8-inch clothed Ricky Chapman action figure is dressed in a fabric Santa suit with removable sculpted hat. The figure is fully poseable and comes with gun and axe accessories in window box packaging.

It’s Garbage Day! Ricky is being released from a mental hospital. He takes with him the terrifying memory of his brother Billy’s death and the memory of Mother Superior who brought about his brother’s demise. For Ricky, starting a new life means avenging his brother’s death, which sets him on a blind journey of relentless revenge, leading ultimately to Mother Superior. And when he gets to her, not even her faith will be enough to stop Ricky as he follows in the family tradition of Christmas carnage.

Fans of the film will want to take note of two exclusive offers on the release—which are only available at shoutfactory.com while supplies last. 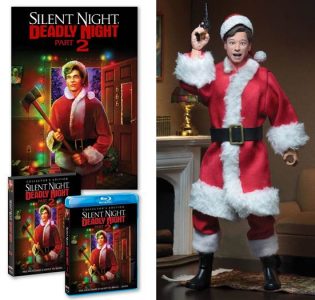